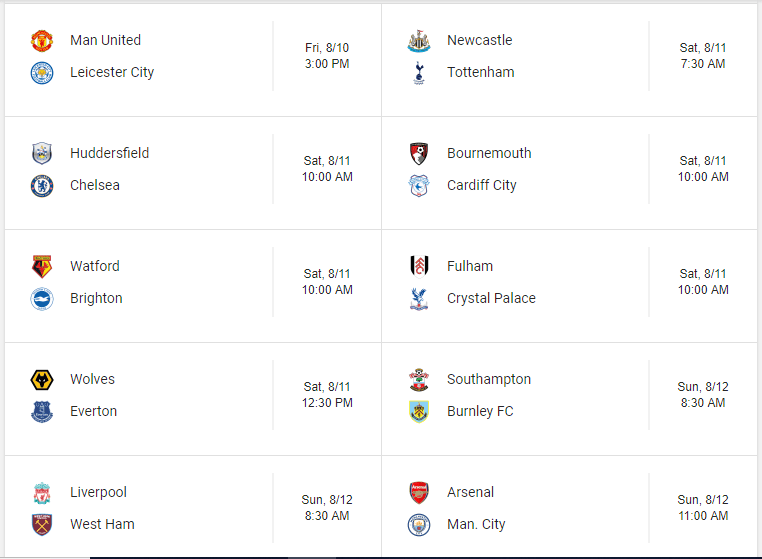 This Friday, Saturday, and Sunday, August 10-12 marks the opening weekend for the 2018-19 English Premier League season.  Manchester City will look to defend its title and build on its 100 point team point tally from 2017-18 (if that’s even possible).  The chase pack will likely include recent oddsmaker sweethearts, Liverpool, who did much this offseason to address their issues in net and lack of team depth, as well as Manchester United, Chelsea, Tottenham, and Arsenal.  With the relegation of West Bromwich Albion, Swansea City, and Stoke City, that means we see three new clubs moving up from the Championship for this season.  Cardiff City will replace the Swans as a Welsh club representative.  Wolverhampton Wanderers F.C. and Fulham F.C. will also advance, rounding out the Premier League’s 20 team field.

Friday, August 10, will feature one match.  Manchester United will host Leicester City, now light one Riyad Mahrez, at Old Trafford at 3p EST (8p in Manchester).  Saturday, 8/10 will feature 6 matches with Newcastle United v. Tottenham Hotspur at St. James’ Park in Newcastle at 7:30a EST, 3 matches at 10a EST, and Wolverhampton v. the now Rooney-less Everton at Molineux Stadium in Wolverhampton at 12:30p EST.  Sunday 8/11 will bring us 2 games at 8:30a EST and will wrap up the first round of fixtures with the most anticipated game of the weekend for most.  Arsenal will host Man City at the Emirates in London at 11a as Unai Emery makes his EPL coaching debut as Arsenal’s first coach not named Arsene Wenger in 22 years.  #WengerOut supporters finally get their wish, but getting even a point here is a tough ask against a polished Guardiola squad.

For bettors, there are some important factors to pay close attention to as you weigh your Matchday 1 betting options.  Most importantly, how does the World Cup affect the team or teams you are considering?  Several teams may have players who will not play in their club’s first match as they are not up to full fitness after the typical 3 week or so off-period most players received when their country’s team completed its World Cup journey.  And, speaking of fitness, it is crucial to keep in mind that almost all players are playing their first true 90 minutes of competitive football in a month or several months.  Preseason friendlies and tournaments can never quite simulate the mental and physical grind that is a Premier League match.  It should not be unexpected to see certain players and teams wear down late in a high tempo game or one in extreme temperatures.  Next, how will offseason player movement affect a team?  Will new additions have truly been able to gel yet, creating a cohesive unit?  Sometimes a team with less talent but few changes from the previous season can sneak up on a team with more talent but multiple new pieces.  Lastly, how will newly promoted teams perform?  Are their home crowds known to impact a game?  Watching tape on a team from the Championship may not be enough to understand exactly how to break them down.  This can often shorten a game for a favorite, leaving them with perhaps just the second half to find that needed goal.

So, do your research.  Who is starting?  Who won’t play?  What preseason playing time and competition did key players have?  What is the weather?  What style of play do the promoted teams employ?  How will new coaches affect a team’s tactics (e.g. Sarriball at Chelsea)?  Ask yourself these questions and more.  Watch as many matches as you can so you can start to see for yourself who is fit, who is parking the bus, and who needs a few weeks to get used to playing together.  No detail is too small to consider.  If you are not sure, lay off.  There is always tomorrow.